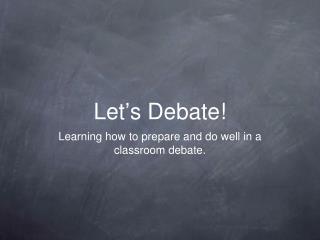 Let ’ s Debate!. Learning how to prepare and do well in a classroom debate. Objective. Debate an issue for the perspective of a historical figure Recognize that the Civil War was about more than just slavery. Debates!. What is a debate?. Debate. Debate Manners - . recall that debate is a cooperative activity with a long history as civil discourse. before the

The 1ar: Debate’s Paramedic - . get the patient to the hospital…alive. why is the 1ar hard?.

DEBATE IT! - . in competitive debates teams compete. t he purpose is to train young people who may in future be required

Debate Reflection - . based on the debate and what we have discussed in class, write a 2 paragraph reflection on your

WELCOME TO DEBATE! - What is debate?. welcome to debate!. we have a national topic that hundreds of thousands of students

Cary Academy Speech &amp; Debate Team - . lincoln douglas debate one on one. format is similar to the 7 th grade

Debate Basics - . (in other words . . . how to present arguments like a professional!). what is a debate?. a debate is an

Competitive Debate: An Introduction - . essential question – what are the different events available in competitive