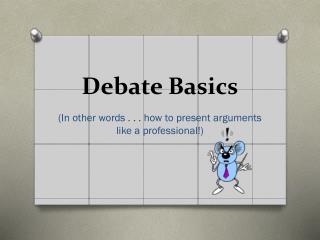 Debate Basics. (In other words . . . how to present arguments like a professional!). What is a Debate?. A debate is an organized argument between two teams: The AFFIRMATIVE team The NEGATIVE team Teams debate an issue called a RESOLUTION : NAMI Basics Education Program - The fundamentals of caring for you, your family and your child with mental illness

Neuromarketing : The Basics - . it’s only business. we are exposed to over 2 million ads during our