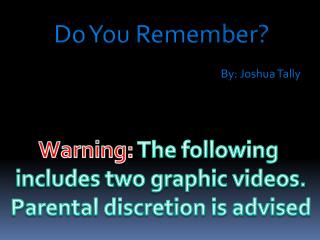 Do You Remember?. By: Joshua Tally. Warning : The following i ncludes two graphic videos. Parental discretion is advised. Do You Remember?. Your Birthday?. What you ate yesterday?. Your first automobile?. Some of us:. The rest of us:. What about your favorite place?. Reading Apprenticeship Workshop - . dr. mark ryan. what do you remember about your personal reading history? when did you

The Titanic - . by courtney. contents. construction facilities on board maiden voyage the sinking aftermath. the

Welcome to … - . because of your love paul baloche . as we come into your presence we remember every blessing that

‘I hear and I forget. I see and I remember. I do and I understand.’ Chinese proverb - . active learning examples.

Remember each question will be in the form of an answer and you must respond with a question. - Let's review. remember

Factoring Polynomials - . finding gcf. if you remember multiplication with real numbers, then you should remember the

'Those that cannot remember the past are condemned to repeat it.' (George Santayana) - . -is impossible to ascertain the

FRUITS AND VITAMIN C - . notes. what are vitamins? . chemicals that help the body function properly. b. water soluble b c

KNOW YOUR SYMBOLS - . produced by david morris. what are map symbols? why do we have them? why should we try to remember

Unit Seven - . language structure. see the following sentences and pay attention to the grammar rules they use:. i

Quotes from… - . “i got so drunk last night i don’t remember what i did. i know i got sick, and i think i had sex