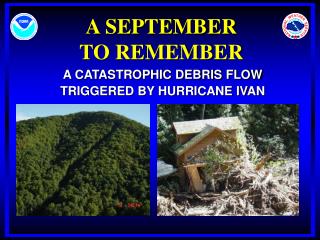 A SEPTEMBER TO REMEMBER

A SEPTEMBER TO REMEMBER A CATASTROPHIC DEBRIS FLOW TRIGGERED BY HURRICANE IVAN Overview of the Event Torrential rains from Hurricanes Frances and Ivan drenched the mountains of North Carolina.

A SEPTEMBER TO REMEMBER

McKinstry Creek near Delevan, NY, 5-18-2006, flow left to right - On the road to the mckinstry creek project, a complete

The Atmosphere: Energy Balance - . the photo shows knee-deep mud and debris clogging a pedestrian underpass near the

Sophia Creek Community Camphill and Friends in Barrie - . welcome to our neighbourhood in the busy downtown core of

Early Logging in the San Juan Valley - . the railroad the camps the logging the union. by “ wild”. click to advance

The Revolutionary War - . battle of kettle creek: a big victory in georgia for the patriots. the battle is important