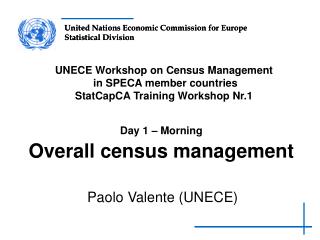 Good Morning! - . a. to give our customers the confidence that power problems will not disrupt their systems, data, and

Looking Forward to the 2010 Census - . the changing demographics of the nation c barbara everitt bryant 2009. barbara

Census 2011 – Outputs &amp; Analysis - . what we have published, what we &amp; others have planned and where

Getting some Google loving (…first thing in the morning) - . evan cunningham dunlop | managing director. who are you?.

Welcome to St.Lukes for our service of morning worship - . there is a h earing i nduction l oop : s witch your hearing

An Overview of the American Community Survey - . 1. overview. what is the american community survey? content survey

Do Now - . good morning! as you get settled, please take this time during coffee and conversation to make sure your

Cooperative Program and Stewardship - . a census of southern baptist pastors and selected laity. methodology. census of