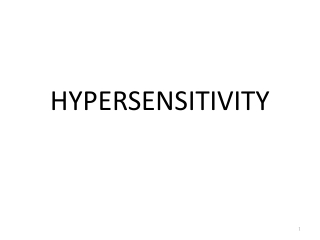 Allergy and Hypersensitivity - . i. introduction. a. definitions. allergy immune-mediated response to innocuous

Hypersensitivity Reactions (HSRs) - . objectives. the learner will be able to: know the signs and symptoms

Hypersensitivity reactions - . the immune system is concerned with protection of the host against foreign antigens,

Suspected Hypersensitivity or Anaphylaxis - . in all cases in which infusion reaction symptoms of any grade are observed,