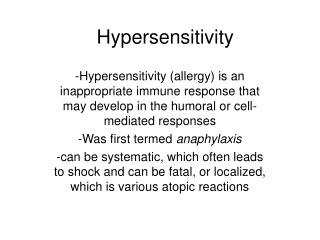 Hypersensitivity. -Hypersensitivity (allergy) is an inappropriate immune response that may develop in the humoral or cell-mediated responses -Was first termed anaphylaxis -can be systematic, which often leads to shock and can be fatal, or localized, which is various atopic reactions .

Hypersensitivity - . an inappropriate or exaggerated immune response to an antigen... which is either exogenous (present

HYPERSENSITIVITY - . by dr mahesh mathur,md , dcp (uk). pre test. 1 . which of the following cells are involved in

Hypersensitivity - . a damage to the host, mediated by pre-existing immunity to self or foreign antigen. dr. sudheer