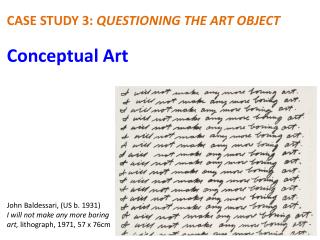 Conceptual Art - . (not concept art). what is it?. artwork in which the ideas behind the art are more important than the

Conceptual art - . key artists and collaborations. joseph kosuth. one and three chairs, 1965. clock (one and five),

CONCEPTUAL ART - . a short answer question just for fun… . (this question worth 12 marks. the paper will suggest you s

Conceptual Art Rubric - . for a 4 you need to have all of the following criterion: illustration uses most of space on

Contemporary Art and Conceptual Learning - . central idea. contemporary art can serve as an engaging provocation for