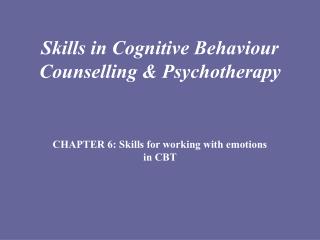 Skills in Cognitive Behaviour Counselling & Psychotherapy. CHAPTER 6: Skills for working with emotions in CBT. The nature and functions of emotion ( In as far as we have any real understanding of it whatsoever!). Cognitive Dimensions - . of notations and other information devices. alan blackwell tutorial for diagrams 2008. what are

Using Jade Behaviours - Primitive behaviours. simple behaviour: a basic class that can be extend in various ways and most

Chapter 14: Therapies - . what is psychotherapy?. any psychological technique used to facilitate positive changes in