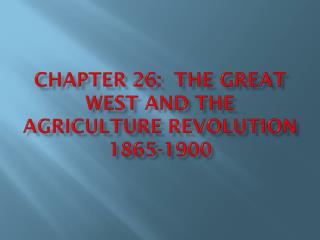 Chapter 26: The Great West and the Agriculture Revolution 1865-1900. The Clash of Cultures on the Plains. The West, after the Civil War, was still largely untamed. It was inhabited by Indians, buffalo, coyotes, Mexicans, and Mormons. Chapter 20 - . politics and expansion in an industrializing age 1877-1900. introduction. this chapter covers: national