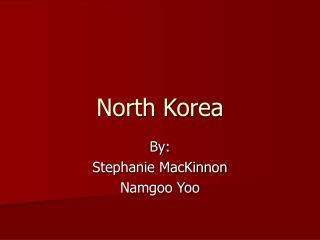 North Korea. By: Stephanie MacKinnon Namgoo Yoo. North Korea Soviet Union, the Peoples Republic of China Substantial investments in their military forces. Goal was to reunify Korea with the beliefs of the North. They planned to do this with force. South Korea Japan, United States