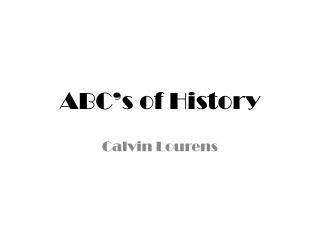 ABC’s of History. Calvin Lourens. A. Abstain - to not take part in some event. Affluence – the state of having wealth. Ambush – surprise attack. Arsenal – a storage place for weapons and ammunition. B. Back country – a region of hills and forest. Bicameral – consisting of two