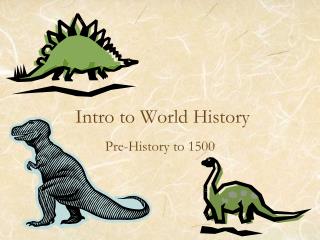 Intro to World History. Pre-History to 1500. Introduction. History is necessary to human survival Must know where we came from Regardless of beliefs, history begins 2 million BC. Dawn of History. Old Stone Age or Paleolithic Age “Lucy” 1959 by Leakey's in Tanzania

The Concept of World History - . ap world history. what is big, global, and world history?. in groups of 2-3, share what

Welcome to World History - . mr. wood world history 10 1. i will let you know where you sit after you get your seat,

What is History? - . duh???!!!!. but who decides what is important? why do we bother learning about them?. what is

Intro to Evolution - . college bio ch. 16. what we will study. intro to evolution the what’s, who’s, when’s,

Why Study World History? - . to try to understand why things are the way they are in the world today to try to relate

Intro to the Internet - . internet: a network of network the internet consists of thousands of smaller networks they may