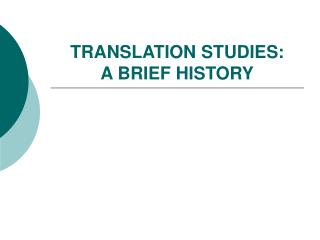 Translation Theory Practice 1 Course No. 1400141 - Ivor richards:translation is very probably the most complex type of

HERMENEUTICS AND TRANSLATION - . some views of hermeneutics throughout history: schleiermacher, heidegger and gadamer.

5 th Glendon Graduate Conference in Translation Studies - . welcome to glendon college and toronto!. (many thanks to

History of Translation - . a look at where the bible came from and other cool stuff along the way…. blessed is the

“Harmful strategies to Translation Studies and its practice: localization and crowdsourcing ” - Gl/tran 5100: