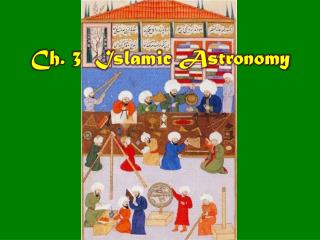 ISLAMIC ARCHITECTURE - . islamic period (632a.d.-1648a.d.). most of ruling class was jewish or christian at the time of

General GeoAstro II: Astronomy - . the name of the game : slides will not be put on the web attend the lectures, take

Jesus in the Qur’an and Islamic Tradition - . presentation by vernon k. robbins [in the menu on the top line, click