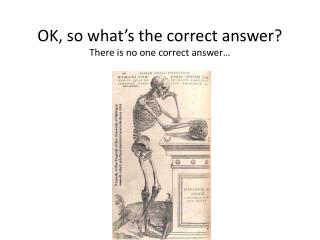 OK, so what’s the correct answer? There is no one correct answer…. Our bone data agree well with a linear fit: D = a L . You’d think somebody would have noticed this…. Look at these two femurs when we scale them to the same length! Don’t they look about the same ?. Big = thick??? QUIZ : FAMOUS PERSONALITIES OF INDIA - . rules. there will be six teams and each team will consist of two students. there

Constitution Unit Review - For each question, click the correct answer. answering correctly will bring you to the next

AHSGE SPEC QUESTIONS - . social studies. directions. read each question carefully and write down what you believe to be

Psychology - . the study of the mind. the asch conformity experiment. (1953). section one:. what to do?. answer the first

OGT Question of the Day! - . make sure you write down the entire question and your answer. after we go over it as a class

Use a #2 pencil and mark the correct answer on a half-size brown scantron sheet. - Ics 45 – midterm exam - culture

DRIVING TEST PRACTICE - . you will select the letter that matches your answer to the question. click with the mouse to

Let’s Go Shopping! - . teacher’s note: on the back of each card are: the correct answer and explanations of why the

Clogged Artery Cleanup - . clean your arteries and save yourself!. each team is responsible for their half of the heart,