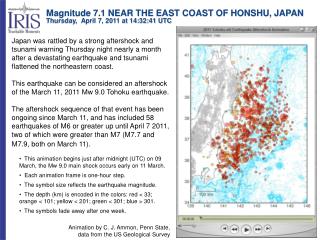 Magnitude 7.1 NEAR THE EAST COAST OF HONSHU, JAPAN Thursday, April 7, 2011 at 14:32:41 UTC. Japan was rattled by a strong aftershock and tsunami warning Thursday night nearly a month after a devastating earthquake and tsunami flattened the northeastern coast. Earthquake rattles Japan - The aftermath of the magnitude six

From Iran to Morocco Development Challenges in the Middle East and North Africa - . qaiser khan, senior economist, the