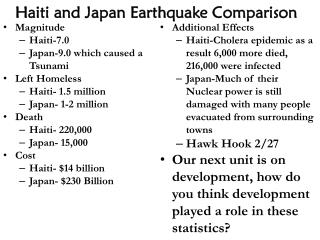 Haiti: After the Earthquake - . french ii culture project by jean-luc. the national palace in port-au-prince. haiti. the

Responding to the Earthquake in Haiti - . on january 12, 2010 a powerful 7.0 magnitude earthquake devastated haiti. photo

THE HAITI EARTHQUAKE 2010 AND CARICOM RESPONSE TO HAITI - . presentation outline. context setting and the event the

Haiti Earthquake Response - . before the january 12 earthquake, haiti was already the poorest country in the western