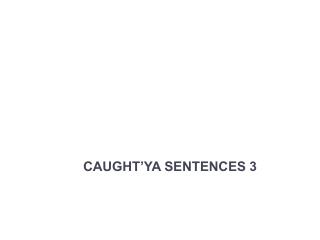 Professional Judgment: Should ya, Could ya, Would ya - Objectives. a brief summary of professional judgmentidentify the

You’ve Been Caught! - . how a coalition has joined forces with multiple law enforcement agencies to address alcohol and

Caught Ya - . quack unit four. period one. the crying person needs someone to assuage them. i was assuaged when me and my

Do Now! 3 sentences - . how were your snow days? what did you do? hw: advanced: “the hangman” and questions academic:

Caught Ya ’ - . vocabulary unit 5. period one. as we were in the museum we plod through the exhibits. some artist’s

Caught Ya ’ - . quack 9. period one. in the winter the bay cemetary is a somber lonely place when all you hear is waves

Caught Ya ’ - . quack unit 5. period one. alot of labyrinths are to big it is hard to find you’re way around. i seen

Write 2-3 sentences explaining… - . bellwork on your bellwork paper…. what you see in the picture. what you think

Don't Get Caught - . trap. it sounds like a perfect solution. sign the deed back to the bank and all will be forgiven.

Write 2-3 sentences explaining… - . bellwork on paper…. what you see in the picture. what you think this picture

Caught ’ ya! for March 4, 2013 - . its vivian virtuous whispered isabelle to her freinds. i remember her from last year