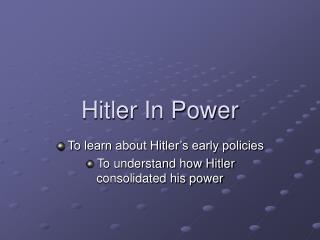 Unit 5: Hitler and the Nazi’s in Power - . i. the final fall of the weimar republic. a. hitler becomes chancellor jan

Hitler - . nazi germany. and the rise of. how did hitler and the nazi party establish and maintain totalitarian