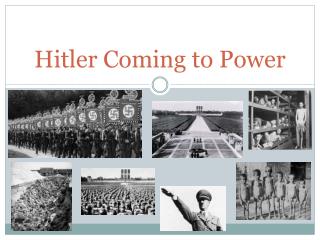 Hitler Coming to Power. Hitler’s Early Life. Hitler was born in Austria on April 20 th , 1889. Hitler had 5 siblings, but only him and his sister, Paula, survived childhood. He grew up in a middle-class family He wanted to be an artist and he was baptized Catholic. Why was Hitler able to come to power? - . 1. background suited it: the great depression. overinvestment overconfidence in