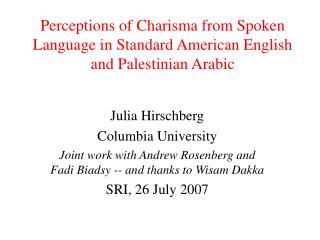 Perceptions of Charisma from Spoken Language in Standard American English and Palestinian Arabic. Julia Hirschberg Columbia University Joint work with Andrew Rosenberg and Fadi Biadsy -- and thanks to Wisam Dakka SRI, 26 July 2007. What is Charisma ?.

Arabic Language - . الدّرس الأول. introduction. the arabic alphabet is written from right to left. there are

AN INTERNATIONAL LANGUAGE - English. an international language. part 1. the history of english. a 1000 years ago it was

Lecture 12a: - . language, thought &amp; culture – dialects. who in this room speaks a dialect? dialects dialects

Accents in American Movies - . lucie doležalová lenka koudelková. general american. this refers to the spectrum of

Israeli–Palestinian Conflict - . by jesse trieu and austin turgeon. the israeli–palestinian conflict is between the

ENGLISH GRAMMAR - Class 2 . lectio ii . english grammar. language : the means by which we express our thoughts, either