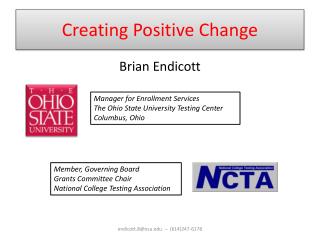 Creating Change….. - Creating change…. ….because you really are what you eat. food and farming team objectives:

Positive social change - . encourage your members to join 100 youth from all over the world at the unaoc-ef summer school

Creating a Positive Atmosphere! - . reaching, relating to and rejoicing in those “terrible” teens bobbie henley,

Positive Thoughts Lead to Positive Change - As soon as you are infatuated or madly in love, you're too emotionally

Creating Lasting Change - . dealing with difficulties. “i struggle with the idea that the difficulties that we have are

Positive change – from within - . an inclusive and practical way to change behaviour and improve performance by

Being Positive During Change - . do changes paralyze you or motivate you?. how do you deal with change?. it is amazing

Change these sentences Positive-Negative Negative - Positive - . 1. i didn’t like what you said. 2. i grew up in the

Creating a Positive Safety Culture - . purpose. show that safety improvement work is as much about developing a