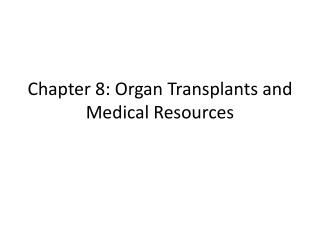 Chapter 8: Organ Transplants and Medical Resources. Major ethical issues. As with many other bioethical issues raised in this book, the existence of those issues has resulted because of the development of new medical technologies. Critical Access Hospitals (CAH) - . what every cah needs to know about the conditions of participation 2011. part 3 of 3.

Environmental and medical issues - . global warming, pollution and the problem this causes. infertility treatment and

Organ &amp; Tissue Donation: The Power to Save Lives - . who we are. federally-designated organ procurement