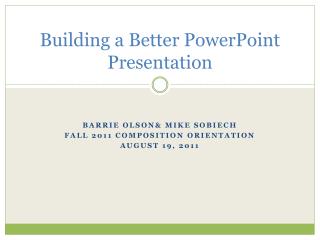 A POWERPOINT PRESENTATION - Nhs in the health service. a powerpoint presentation. by add your name(s) here. read and

A POWERPOINT PRESENTATION - . university of maryland dental school. how to operate the lecture hall audio/visual system.

A POWERPOINT PRESENTATION - Health, safety and ict. a powerpoint presentation. by add your name(s) here. health and

A PowerPoint Presentation - . background. developed and used in schools across north america for over 10 years hawker

A PowerPoint Presentation - . brought to you by the one and only kristen jean stager. please enjoy!. a brief

Building a Better Sentence - . write a sentence using only an article (a, an, or the), a noun, an action verb, and the

Building a Better Podcast - . by carrie carpri. be prepared. organization is key requires a beginning, middle, and

Building a Better Marriage - Fate of marriages. end in legal divorcesettle for emotional divorcegrow in love for a

Building a Better Word! - . free word warp. use your spelling skills to quickly create words and score points. how many