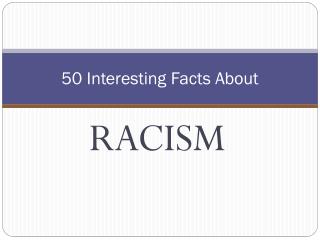 50 Interesting Facts About. RACISM. #1. The concept of race is a modern concept. In the ancient world, the Greeks, Romans, Jews, Christians, and Muslims did not have racial categories.  Rather people were divided according to religion, class, language, etc. #2.

The Interesting In Between: Why Complexity Exists - . scott e page university of michigan santa fe institute

Welcome To Big Board Facts - . today's topics. next. slope. next. equations of a line. next. parallel/ perpendicular.

Halophiles - . by aubrey mcdonald. overview. what is a halophile? diversity of halophilic organisms osmoregulation

Interesting Facts About the Reindeer - Reindeer (caribou) fur ranges widely in color, based on the subspecies in