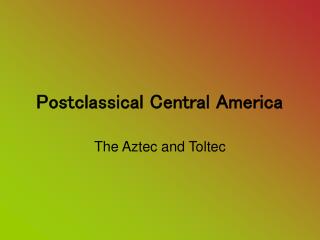 Postclassical Central America. The Aztec and Toltec. The Beginning of the Toltec. Were nomadic people from the north Took full advantage of the fall of the Mayan civilization to take control of more prosperous farm land Established capital at Tula in 968 Postclassical India - . c. 600 to c. 1450. political fragmentation. india was mostly decentralized through most of the