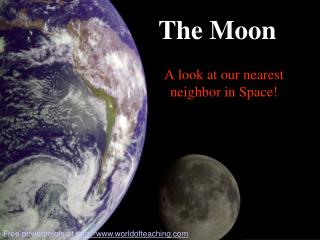 The Moon. A look at our nearest neighbor in Space!. Free powerpoints at http://www.worldofteaching.com. What is the Moon?. A natural satellite One of more than 96 moons in our Solar System The only moon of the planet Earth. Location, location, location!.