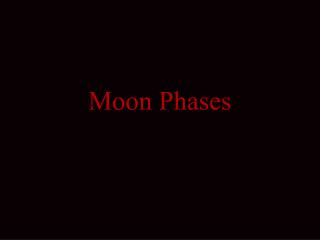 Moon Phases. If you watch the Moon from night to night you will notice that it seems “wax” larger from a new moon to a full moon then “wane” smaller from a full moon back to new. The time from one new moon to the next is about 29.5 days and is called a lunar month. Did we really land on the Moon? - . dr martin hendry school of physics and astronomy university of glasgow. did we really

Figure 50.0x Earth from the moon - . figure 50.1 distribution and abundance of the red kangaroo in australia, based on

Henry and Mudge Under The Yellow Moon - . author: cynthia rylant. chipmunk - a small mammal that has cheek pouches and a

The physics of motion - . if you see the moon setting and it is full, what did the moon look like when it was on the

Overhead Throwing Biomechanics - . generally broken down into six phases involves application of the kinematic link or