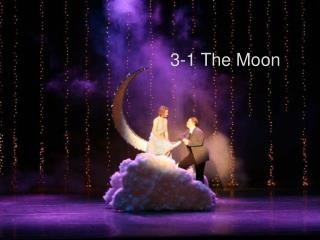 3-1 The moon. 3-1 The Moon. Exploration of the Moon. Some imagined seas and inhabitants. What is the nature of these features?. 1609, Galileo: First to use the telescope to observe the Moon. Discovered craters. Volcanoes?. Spacecraft exploration. The Moon The Moon - . a mystery by: tess bainbridge. what is t he moon?. the moon was made about 4.5 billion years ago

Moon Lesson 3 - . formation of the moon. more detail on the lunar composition. the moon’s bulk composition is similar

Space Exploration: The Moon 1 - Focus: the student can identify the moon’s surface features and the moon phases. the

Experiment 3: Phases of the Moon - . how come i can see the moon during the day?. moon takes one month to complete a

The Moon - . by rebecca. the moon is orbiting at about 2,300 miles per hour. the moon is slowly drifting away the moon

The Moon - . it's just a phase it's going through. moon. our planet's large natural satellite, the moon, is the easiest

The Moon - . ond’rea. what is the moon made of?. the moon is made of rocks. how does it move?. it rotates around the

The Moon: - . geologic history and future exploration. what we knew about the moon before apollo. apollo missions.

The Moon - . unit 5.5. surface. the outside part of something. spacecraft. a vehicle for traveling into space. lunar.

The Moon - . trey. what is the moon made of?. the moon is made rock. how does it move?. it spins arourd the earth. the

The Moon - . arny, chapter 13. introduction. introducing the moon earth’s nearest neighbor is space once the frontier

The Moon - . the moon is our only natural satellite and is located about 238,000 miles from earth. the temperature