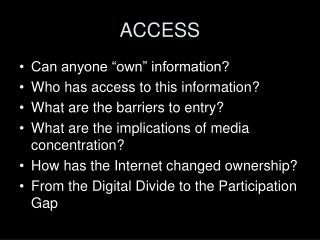 ACCESS. Can anyone “own” information? Who has access to this information? What are the barriers to entry? What are the implications of media concentration? How has the Internet changed ownership? From the Digital Divide to the Participation Gap. “It’s not My Fetish, I swear”