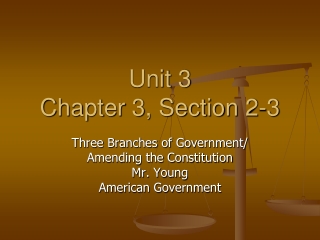 Unit 3 Chapter 3, Section 2-3. Three Branches of Government/ Amending the Constitution Mr. Young American Government. Essential Question. What articles set up the 3 branches of government and what powers did the Founding Fathers give each branch according to the constitution?. Article 1.

Section 2-Polling Question - . a b c. do you think it is right for the u.s. government to use force to keep order? a.

Section 2 Native Americans - . the native americans are obviously very important to this topic as they were the native

Section 2: Newton’s Law of Gravitation - . in 1686 isaac newton published his universal law of gravitation . this

Chapter 5, Section 2 - . a new constitution. the constitutional convention. what to do?. revise or scrap the articles?.