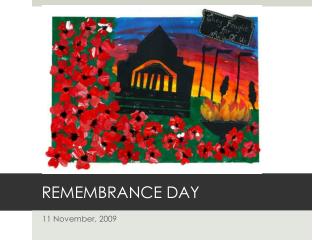 REMEMBRANCE DAY. 11 November, 2009. What is Remembrance Day?. At 11 o’clock, on the 11 th November, the nation stops to remember those who fought for our freedom during the two World Wars and those who have lost their lives in more recent conflicts. Keeping the Peace Museum of the Regiments Remembrance Program - . introduction remembrance day: is commemorated in canada

Remembrance Day - . but who remembers that, in 1933. why ???. because. adolf hitler freed germany from international debt

Day of Remembrance and Action on Violence Against Women - . by the fsa status of women december 6,

Wordle - Marcel proust “the real voyage of discovery consists not in seeking new landscapes but having new eyes.” -

Paraphrase – Sonnet 30 by W. Shakespeare - . when to the sessions of sweet silent thought i summon up remembrance of

Studio Singh Best photography - We are show our best creativity ,imagination,people's feeling and remembrance. visit my

Open - . i n remembrance of those we love. july 1 – july 7. april. dedicated to dates. words of dedication. fondest