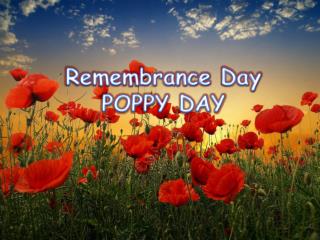 How To Find The Right Personalized Pet Remembrance Jewelry - If you lose a pet that you loved very much, you will need to

poppy - By avi also by chloe. poppy. chapter 1 mr. ocax. in the beginning there are 3 characters

ANZAC Day - . when was world war 1?. world war 1 started in october 1914 with england fighting turkey, but the australian

ANZAC DAY - . this day is a very special day in new zealand. we would like to tell you a little bit about it. anzac day.

Poppy - . poppy the book by avi by andrew gorosh #11. chapter1 mr.ocax. there where 2 mice name poppy and ragweed and 1

In Remembrance of Him - . in remembrance of him. jesus predicted his death &amp; resurrection. #784 – why did my

The Poppy - . remembrance day. in flanders fields. http://www.youtube.com/watch?v=knpz2tvvbro. the poppy. where do

“Do this, in remembrance of me.” - For as often as you eat this bread and drink the cup, you proclaim the lord's

How Marketing Destroyed The Soul of the Poppy Appeal Online - . a lament. showing support. i sign up around 20 th october

In Flanders Fields - . poetry lesson. before you read the poem.