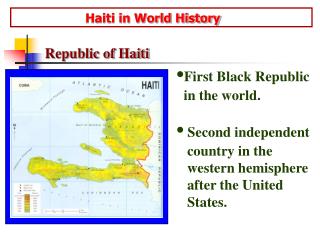 What effect did the Age of Revolution have on Global Society? - Revolutions around the world inspired by the american and

African Influence on Caribbean Culture - . history. about 5000 b.c the first people to lived on the caribbean islands

Comparative Revolutions: French and American - . unit 4 - day 5. declaration of rights of man and the citizen. a

World History Thursday, 8 October 2009 - . remember to write your agenda-also, get out pen/pencil and paper to take

Haiti - . a country whose history is “written in blood”. hispaniola. columbus arrived north coast of haiti in 1492

Checking Out Me History - . john agard. read the poem through. important things to know…. 1066 = crucial to english

Afro-Caribbean Spiritualities - . many linguistic and religious traditions in africa dahomean (from dahomey) nigeria and