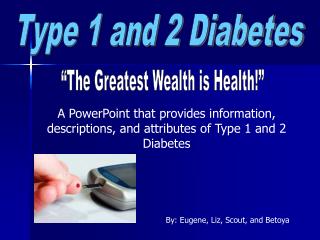 Diabetes Type 1 and Type 2 - . by jabari legree. type 1 diabetes. the cause of type one diabetes is unknown. type one is

Type 1 Diabetes Symptoms, Diabetes Type 1 And 2, What Are Symptoms Of Diabetes, Diabeties

Type 2 Diabetes! - Type 2 is the most common form of diabetes, affecting 85-90% of all people with diabetes. while it

Type 2 Diabetes - Facts on type 2. type 2 diabetes is a disease that generally develops over a period of years. ... most

Type 2 Diabetes - . meghan patton b4. type 2 diabetes. this is a lifelong disease in which there are high levels of sugar