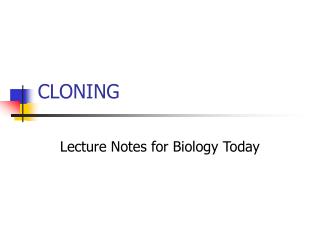 CLONING. Lecture Notes for Biology Today. What is Cloning?. To most people, the term “cloning” means making a copy of an individual. In biology, cloning can have different uses depending on what is being copied. Cloning Molecules and Cells.

cloning - . jurassic park is a theme park which is populated with ________ dinosaurs. the popularity of this film proves