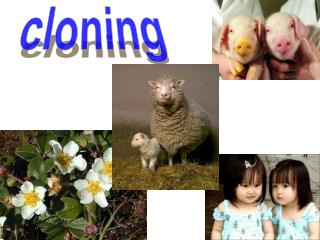 cloning. Jurassic Park is a theme park which is populated with ________ dinosaurs. The popularity of this film proves how interested people are in the subject---- _________. cloned. cloning. How much do you know about cloning?. Which one is the first cloned animal? A. B. sheep. Cloning - . what is cloning?. cloning describes a number of different processes that can be used to produce genetically