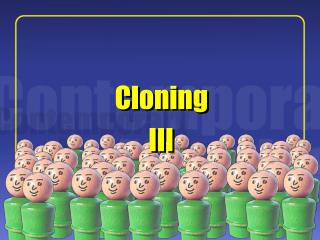 Cloning. Cloning. III. III. John Robertson: “Liberty, Identity, and Human Cloning”. Robertson’s Project. Robertson considers human cloning from the point where Pence left us: with a program of cloning that is safe and effective . Chapter 4 Molecular Cloning Methods - . introduction the significance of gene cloning. to elucidate the structure and

Dna cloning: The basics and the controversy - . created by alicia king. natvigation. before we begin, it is important to

An Integrated English Course Book 4 - . unit fifteen. text i dolly’s false legacy. what do you know about the text?