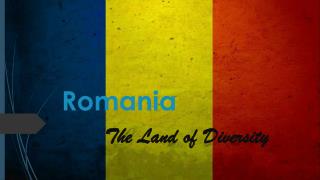 Why to Invest in Romania ? - . international investment forum romanian chamber of commerce and industry october 15, 2004

IASI CITY ROMANIA - . general information. located in the northeast of romania, iasi is the second largest city in the

Welcome to Romania! - . welcome to bucharest! welcome to school 114 “princess margarita”!. a short presentation of

TYPICAL PLANTS AND ANIMALS IN ROMANIA - . the flora and fauna in romania vary with the different types of relief.

Towards Romania of 2022 - . principles of programming. the social and macroeconomic policy of europe is the policy of