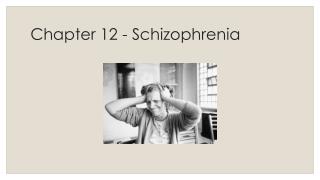 Chapter 12 - Schizophrenia. Psychosis: a loss of contact with reality Ability to perceive and respond to the environment significantly disturbed; functioning impaired Symptoms may include hallucinations (false sensory perceptions) and/or delusions (false beliefs ). Psychosis.

CH 12: Abnormal Psychology and Treatment - . review game. please select a team. we have delusions of grandeur our

Residual Schizophrenia - . by melanie and morgan . definition . residual schizophrenia happens when a person is no

Chapter 16 Schizophrenia and Other Psychotic Disorders - . features of schizophrenia. prevalence in u.s. is 1.1%. average

Schizophrenia on African American women in 1970s - . causes and effects.

Chapter 12 - . psychological disorders. questions we will be addressing in this chapter. how do psychologists define

Schizophrenia and Other Psychotic Disorders - Introduction. the word schizophrenia is derived from the greek words skhizo