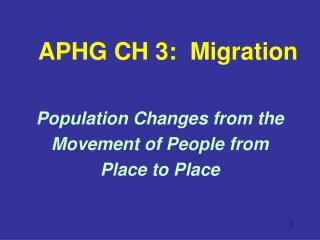 APHG CH 3: Migration. Population Changes from the Movement of People from Place to Place. Geogra phers look at Why & Where People Migrate : Migration: Permanent movt. of ppl across space, from 1 place to another Can be to another country, another city, another continent

Data Center Migration Roadmap - This guide not only helps ensure you remember to plan for everything, but if you aren’t 5 KEY CONSIDERATIONS WHEN EVALUATING A CLOUD MIGRATION STRATEGY - Cloud isn't as risky as you think. enterprises are

Training Programme on International Migration - . organized by un/ece and unfpa in collaboration with nidi geneva,