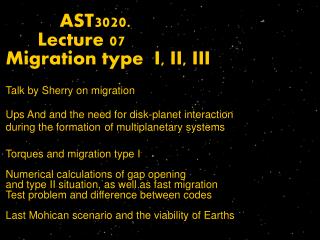 AST3020. Lecture 07 Migration type I, II, III Talk by Sherry on migration Ups And and the need for disk-planet interaction during the formation of multiplanetary systems Torques and migration type I Numerical calculations of gap opening

APHG CH 3: Migration - . population changes from the movement of people from place to place. geogra phers look at why

The Great Migration Series by Jacob Lawrence - . the great migration an american story paintings by jacob lawrence. this

Skill Composition of Migration and the Generosity of the Welfare State: Free vs. Policy-Restricted Migration - . assaf