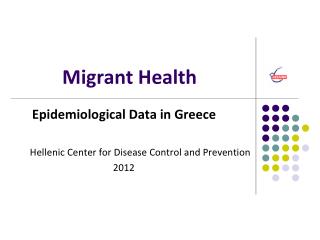 Migrant Health. Epidemiological Data in Greece Hellenic Center for Disease Control and Prevention 2012. Migration and Health-key issues. Migration is a global phenomenon 3 % of the world’s population resides permanently or temporarily outside their country of origin (World Bank, 2009)

HEALTH PROMOTION - . banyard : psychology in practice: health chapter 6. health promotion. in this module we will be

Department for Public Health Board of Health Orientation Program 2005 - . the only thing constant is change itself.

“WHY SOCIAL DETERMINANTS OF HEALTH? THE EVIDENCE” Commission on Social Determinants of Health - Michael marmot