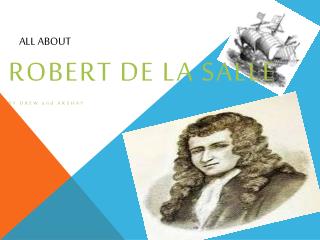 All About. ROBERT DE LA SALLE BY DREW and AKSHAY. Who was his sponsor?. His sponsor was France King Louie 14 wanted him to pay for his own trip The governor of Montréal paid for his trip. Where did he explore. He explored the Mississippi River and the tributaries