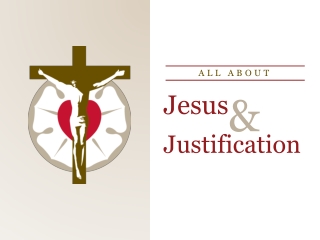 ALL ABOUT. Jesus. &. Justification. WEEK ONE. Jesus. Reform. WHAT DOES “ THE REFORMATION” BRING TO MIND?. Overthrow of “Catholic oppression” (Marxist) Source of modernity (general historians) Rise of Naziism (Shirer, et al.) Luther stories? … the thunderstorm The solas ?.