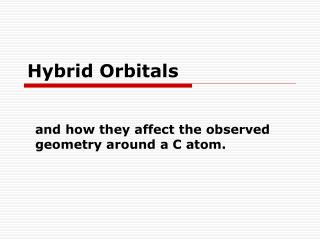 Hybrid Orbitals. and how they affect the observed geometry around a C atom. Valence Electrons. Valence electrons are usually the s and p electrons in the outermost unfilled shell of an atom. For main group elements, the number of valence electrons is the same as the group number.

Electrons and Orbitals - . quantum mechanics. describes the arrangement of electrons in atoms in terms of: main or

Chemical Bonding - . sigma and pi bonds. what is a sigma bond?. this is a covalent bond in which the electron cloud

Atomic Orbitals and Quantum Numbers - . what are they???. atomic orbitals. these are the areas of probability where an

Lecture 18: Orbitals of the Hydrogen Atom - The material in this lecture covers the following in atkins. the structure

Molecular Geometry - Molecular structure. molecular geometry. overlap of orbitals. the degree of overlap is determined by

Hybrid Safety - . how do you identify a hybrid?. vehicle displays “hybrid” on the outside dashboard shift label

The Hybrid Car: A look at the future of cars - . by: kenneth barnett. what makes a hybrid?. a hybrid is anything that

Hybrid Cars - . what makes it a hybrid. any vehicle is hybrid when it combines two or more sources of power the