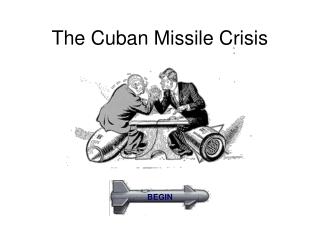 The Cuban Missile Crisis. BEGIN. Bay of Pigs. Next. Cuba provided with arms. PREVENTION MANAGEMENT OF AGGRESSIVE BEHAVIOR - Identifying crisis behavior. learn to stop a crisis before it startswhat

How may I help you? - . user: i need to do some surveillance looking for missile launchers. [mission-type = ?] &amp;

The Cuban Missile Crisis and Beyond - . fidel castro took control of cuba in 1959 and declared himself a communist. the

Finance and the Crisis Umberto Cherubini University of Bologna - . outline. how the crisis started securitization

Aim (L51) : How did the Cuban Missile Crisis increase Cold War tensions? - . do now : read the tips and tricks for