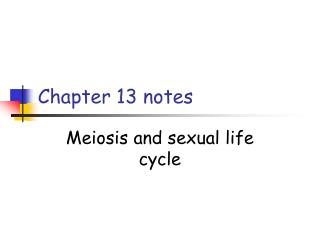 Chapter 13 notes. Meiosis and sexual life cycle. An Introduction to Heredity. Heredity : the transition of traits from one generation to the next Along w/ similarities, there is also variation- offspring differ somewhat in appearance from parents to offspring

The Digestive System Chapter 23 – Lecture Notes - . to accompany anatomy and physiology: from science to life