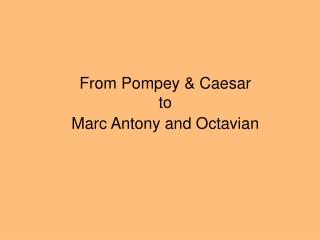 From Pompey & Caesar to Marc Antony and Octavian From Pompey & Caesar to Marc Antony and Octavian

Moving Beyond MARC: Musings - . rick block. rick block on rda:. “i think it is a disaster. i'm hoping it is never

MULTIPLE CHOICE - . julius caesar. 1. how does caesar first enter the play?. in disgrace; he has been captured . in a

UNDERSTAND Simple Sentences A simple sentence has a subject and a verb. It is a complete thought. - Week 10 monday 4